2016 was the year in which the major roll-out of 53 million smart meters was intended to begin, only 4% having been installed previously. The cost was estimated to be £11,000 million to be met by consumers via a levy on their energy bills, which would hopefully be lower as a result of better information management by both the energy suppliers and their now-more-savvy customers. It would be possible, for instance, to change supplier within 24 hours. Critics suggested, however, that the technological approach was already out-dated, that the savings would not justify the cost, and that the cost was anyway much higher than necessary.

It emerged that there was a particular problem in that the first generation of smart meters were specific to the energy supplier and either didn't work or had to be replaced if the customer switched supplier. There was also more generalised resistance to their installation as individual householders couldn't face the hassle of having an engineer call to install the new meter. It was accordingly reported in August 2017 that (a) there was a shortage of smart meter fitters because the companies had to recruit to demonstrate that they had the capacity to complete the installations by 2020, and yet (b) many of the fitters were partly idle because of customers' lack of interest.

There was an interesting little spat early in 2016 when critics claimed that Ofgem had been too slow to tackle mis-selling and poor service through the the industry. The (relatively new) Chief Exec responded by noting that the regulator had imposed more than £200 million in penalties since 2010. But as Michael Cullen then pointed out, that averaged "less than £1 per year per inhabitant of the UK. The leaders of the power industry must be quaking in their boots". (That's British sarcasm, folks.)

The Competition and Markets Authority published its final report in June 2016, grappling yet again with the tension between competition and protection. Competition is of course the best way to ensure lowest average prices, and highest average service quality, but it carries no guarantees about which particular customers win and lose as a result of the process. The CMA noted that 70% of customers of the Big 6 energy firms were on standard variable tariffs (SVTs) and they could on average save £300pa if they were to shop around for a better deal. But:

Their principal recommendation was that there should be a secure database of 'disengaged customers' who could be targeted by energy companies who could offer them lower prices, although sceptics such as Catherine Waddams noted that "People who aren't switching now are unlikely to start because they receive more [junk mail]. Most won't even bother to open the envelope let alone go further."

The CMA also imposed a temporary price cap (often referred to as a transitional price control, to be abolished on the introduction of smart meters) to help those using prepayment meters. These customers are often quite poor and yet pay more for their energy than those who pay in arrears. The cap was introduced in April 2017 and lowered, typically by £19pa, from October 2017.

As an aside, German RWE-owned Npower announced around the same time that it planned to cut 2,400 jobs – a fifth of its workforce – to reduce costs after losing customers, offering bad customer service and suffering poor financial results. So competition was working to some extent, at least.

One potentially significant CMA recommendation was the introduction of locational pricing for transmission losses - the energy that is lost when electricity is transported from one part of the country to another. This would encourage generation nearer to customers - potentially disadvantaging 'green' energy that is generated on distant hillsides or out at sea.

Not everyone was impressed. One CMA group member, Martin Cave, dissented from part of the conclusions and Dieter Helm reckoned that the companies had defeated the CMA 5-Nil. His paper is here. Others joined him in being sceptical that the arrival of smart meters (supposedly in every home by 2020) would be transformational in increasing customer engagement. Others thought that the CMA could have been more innovative in encouraging modern price comparison technology, believing that tech-savvy customers would put the energy firms under much more competitive pressure once the necessary online and mobile tools were available, as had been recommended by a separate CMA group looking at retail banking. But the CMA sledgehammer seemed to quieten concern about energy prices, for a while at least.

The CMA's own summary of its conclusions is in this separate note.  And, perhaps stung by the criticisms, a pretty good defence of their recommendations was made a year later in a speech by the Inquiry Chair Roger Witcomb.

Robert Hahn and Robert Metcalfe published an interesting paper in 2016 - The Impact of Behavioral Science Experiments on Energy Policy They noted that one of the most exciting areas of current research was the use of experiments to better understand how various behavioral interventions change the energy consumption decisions of consumers and businesses. 'Many policy makers face severe constraints, and are unable to alter markets, regulation, or taxes, so that the price of energy reflects its full social cost. Understanding and changing the pattern of energy consumption is critical for a variety of reasons, including meeting the challenge of climate change by reducing greenhouse gas emissions.' They then identified four general insights from the literature.

A National Audit Office report in October 2016 made uncomfortable reading for the government and its civil servants (emphasis added):-

'The Levy Control Framework, established by the former Department of Energy & Climate Change (the Department) and HM Treasury, set a cap for the forecast costs of certain policies funded through levies on energy companies and ultimately paid for by consumers. Since November 2012, the Framework has covered three schemes to support investment in low-carbon energy generation: the Renewables Obligation, Feed-in Tariffs and Contracts for Difference. It sets annual caps on costs for each year to 2020-21, with a cap of £7.6 billion in 2020-21 (in 2011-12 prices).

According to the NAO, the government failed to fully consider the uncertainty around its central forecasts and define its appetite for the risks associated with that uncertainty. If the Department and HM Treasury had asked more explicitly ‘what if our forecasts or key assumptions are wrong?’, this might have prompted more robust design and monitoring of the Framework, and reduced the likelihood of significantly exceeding the Framework’s budgetary cap .... government needs to do more to develop a sufficiently coherent, transparent and long-term approach to controlling and communicating the costs of its consumer-funded policies. This should include providing an updated report on the impact of its energy policies on bills, as the relationship between Framework costs and the affordability of energy bills is not straightforward.'

A number of factors, including the ready availability of shale gas, and Saudi determination to maintain market share, led to sharp falls in wholesale energy prices in the earlier months of 2016, but prices begin to rise again - though not to their previous high levels - towards the end of the year. This had three interesting consequences.

The first was that the lower prices made nuclear power in general, and the Hinkley Point deal in particular, look very expensive.

The second was that the rebounding (i.e. rising) prices made it harder for the smaller energy companies - and particularly those that had been set up by municipal authorities - to compete with the Big 6. This was because the larger companies buy much of their gas and electricity months or years in advance so as to secure their supplies. This is one reason why they are slow to reduce their prices when wholesale prices fall - so they can then be easily undercut by smaller competitors. When prices rise, however, the smaller companies need to start buying energy in advance if they are not to lose out - but they may not have the financial muscle to do so.

The third was that there was renewed pressure to cap energy prices, particularly the standard variable tariff. The 2017 Conservative Manifesto contained this commitment:

We will pay immediate attention to the retail energy market. Customers trust established brands and mistakenly assume their loyalty is rewarded. Energy suppliers have long operated a two-tier market, where those constantly checking for the best deal can do well but others are punished for inactivity with higher prices. Those hit worst are households with lower incomes, people with lower qualifications, people who rent their home and the elderly. A Conservative government … will introduce a safeguard tariff cap that will extend the price protection currently in place for some vulnerable customers to more customers on the poorest value tariffs. We will maintain the competitive element of the retail energy market by supporting initiatives to make the switching process easier and more reliable, but the safeguard tariff cap will protect customers who do not switch against abusive price increases. 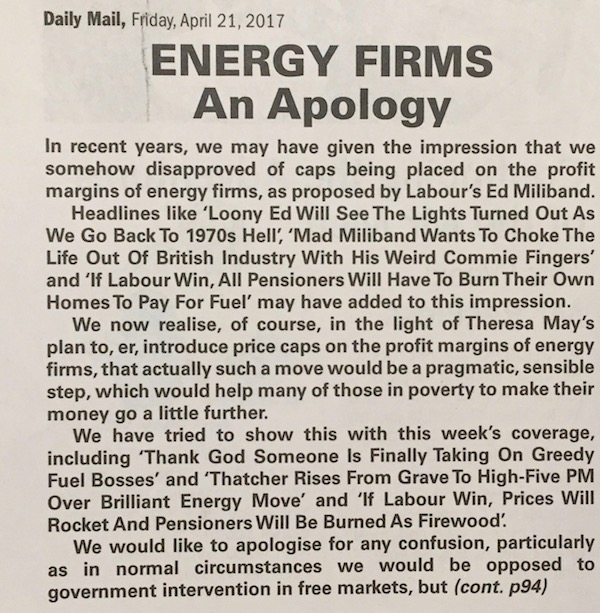 This was met by a fair amount of derision, not least from those who remembered the Tory rubbishing of Ed Miliband's similar commitment before the 2015 election. Roger Witcomb, the Chair of the CMA Inquiry (see above) said that it was "entirely understandable that politicians will wish to continue to seek the holy grail of a price control that does not undermine competition" but the CMA had been unable to find it. A price cap that effectively tackled the problem of overpaying would need to be set close to that which would be seen in a competitive market. Prices would therefore converge at that level, customers would "figure that they have no need to shop around" and suppliers would realise that there was now no incentive to compete by innovating, identifying efficiencies and seeking low-cost supplies.

Other critics pointed out that

More generally, journalists wondered (somewhat tongue in cheek) whether Ministers would in due course attack variable rate mortgages and/or supermarkets who sold the same food at different prices to their competitors - or sometimes at different prices even within the same store.

But the right wing press were more supportive. Private Eye's reaction is opposite.

Developments from 2017 are summarised here.