Click here to read the the climate change background to the UK's investment in nuclear technology.

Click on this image to see a detailed map which once summarised the government's planned future for nuclear power in the UK. 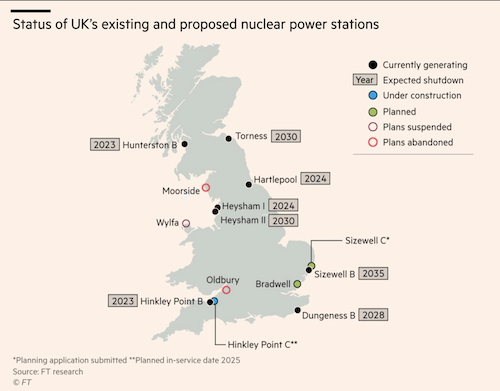 There have been 11 active nuclear power stations in Great Britain.  It is (or at least was) intended that there will eventually be eight replacment nuclear power stations - all in England - at Hinkley Point, Sizewell, Bradwell, Moorside (previously 'Sellafield', and before that 'Windscale' and 'Calder Hall'), Wylfa, Hartlepool, Heysham and Oldbury.

(Moorside, Bradwell and Oldbury did not then generate nuclear power and but are due to be replaced.  Dungeness is the only English or Welsh station that will close without replacement.  Hunterston closed in January 2022 and Torness will close in 2030, and neither will be replaced because of opposition from the Scottish Government. ) 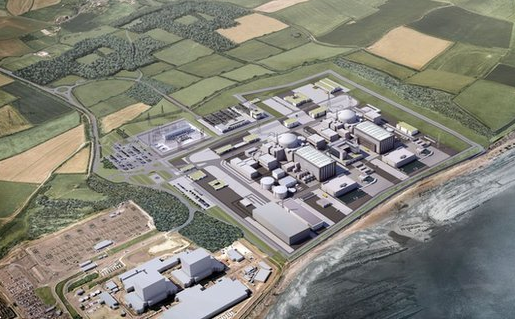 It now seems very unlikely that all eight will be built. Much will depend upon the price that must be charged for their energy compared with renewable energy, and the cost of the latter has been falling quite quickly. The current situation is summarised below.

The UK government agreed in October 2013 to buy energy from a new £16bn two-reactor nuclear power station to be built at Hinkley Point C by a consortium of companies led by EDF and including Chinese companies who will provide some expertise and much of the finance - although the Chinese investment will be guaranteed by the UK government. An artist's impression is on the right.

It is intended that EDF will then build a second power station at Sizewell C, this time using the Chinese variant of their reactor - see further below.

Another nuclear power stations will then be built at Bradwell. It will be an international test-bed for the Chinese third generation Hualong high temperature 1,000 MW reactor. (Note, though, that the Chinese are actually using German technology.)

In January 2019 Hitachi "froze" their plan to build a reactor of their own tried and tested design at Wylfa in Angelsey, North Wales - and subsequently at Oldbury - even though they were offered £75/MwH - a lot more than offshore wind's price of £57.75, though much less than Hinkley's £92.5.  Hitachi confirmed in September 2020 that it definitely wouldn't proceed at Wylfa.  HMG didn't seem too worried, saying that although it believed that new nuclear had an important role, it had to be delivered at the right price.

Westinghouse/Toshiba had intended to build three reactors of their own design at Moorside in Cumbria, but pulled out of this project in late 2018.

Hartlepool, Hinkley Point B, Heysham 2, Hunterston B, and Torness are currently generating nuclear power, but they are all likely to close over the next few years, and by 2030 at the latest, leaving only Sizewell B producing power.

Even for a massive company such as EDF, Hinkley Point and Sizewell are huge investments, which makes them inherently risky. For example, if the price of electricity falls, or becomes more volatile, the company could lose a lot of money. And because the plant would take eight to ten years to build, there is simply too much uncertainty to commit to such a huge investment. For this reason, EDF needs an added incentive to build the reactors. Knowing it will receive a guaranteed price for the electricity generated at Hinkley provides some kind of certainty that the investment will be worthwhile - in other words, profitable - although EDF will carry the risk that construction costs more and/or takes longer than expected. This guaranteed price is known as the strike price and is £89.50 per megawatt hour - or £92.5 pmwh if only Hinkley Point is built. Both these figures are at 2015 prices and will increase in line with inflation.

Unfortunately the government was unable to force the price down by playing different energy companies off against each other, as German power giants RWE and E.ON decided against building new plants in the UK. But this didn't mean that EDF held all the cards. The company was keen to get Hinkley Point C started so it could demonstrate its European Pressurised Reactor (EPR) which would then hopefully serve as a blueprint for similar power stations across the world. There are currently two EPRs being built by EDF-owned Areva - one in Flamanville (in Normandy, France) and one in in Finland. But both these (smaller) projects are running massively late and massively over budget. But the Chinese - now the world leaders in nuclear technology - seem to have made a success of their own variant of EDF's design, and this will be deployed at Sizewell. This has caused the Chinese investors to require the French Government (which owns EDF/Areva) to guarantee the performance of the companies at Hinkley Point. EDF itself has sought a guarantee from the French Government that the latter will if necessary provide sufficient capital to allow Hinkley Point to be completed before income starts flowing once generation has begun.

Pricing: It is frankly impossible to say whether the Government (or EDF) has got a good deal. Only time will tell. But, yet again, it is very clear that consumers are paying a high price for eliminating coal powered generation.

It seemed sensible for Prime Minister Theresa May to decide, in July 2016, to review her predecessor's commitment to Hinkley Point. In particular:

But the construction of Hinkley Point (and also Bradwell) was approved only two months later, as the Prime Minister recognised the political and strategic realities associated with the UK/Chinese/French agreements.

The NAO reviewed the government's decision making in its June 2017 report. Civil Service World summarised the report as follows:

'The NAO said the strike price was £100.38 at 2017 rates, while the average price of electricity in the UK wholesale market has remained roughly £45 per megawatt hour since 2010. While the deal protects UK consumers from cost overruns with the construction of Hinkley Point C, which is estimated to cost £18bn in 2016 prices, the NAO said "[the scheme would have to] overrun by between 400% to 600% to equate to the total cost of the deal”. NAO head Sir Amyas Morse said it would take decades for clarity to emerge on whether Hinkley Point C would provide value for money. “The department has committed electricity consumers and taxpayers to a high cost and risky deal in a changing energy marketplace,” he said. "Time will tell whether the deal represents value for money, but we cannot say the department has maximised the chances that it will be.”

The NAO report stressed that past experience indicated that the government may still need to step in to help Hinkley Point C if it ran into trouble, either by funding alternatives to ensure secure supply of power or renegotiating the deal. But it acknowledged that taking a greater stake in the delivery of the project could have obliged the government to account for the project as a public asset, bringing it onto the government's balance sheet – prompting trade-offs with other spending priorities.'

The House of Commons Public Accounts Committee then issued a detailed and critical report in late 2017.

A 2020 report from the Nuclear Industry Association claimed that new plant might in future be built at a cost to the consumer of £60, reducing to £40, per megawatt hour.  This was probably dependent on the government agreeing that consumers should start contributing to construction costs well before completion, and the Government (that is the taxpayer) sharing some of the cost risk.

EDF, around the same time, announced that Sizewell C (which was supposed to cost much less than Hinkley Point) would cost around £20bn, far more than had been anticipated and getting on for the same cost as Hinkley Point.

One advantage of nuclear power is that it takes up much less land than other low-carbon generation. Hinkley Point will cover 430 acres. You would need 130,000 acres of solar farm or 250,000 acres of wind farm to generate the same amount of electricity. (1 acre = c.0.4 hectare)

Some concern was expressed in early 2016 about the capacity of the Office of Nuclear Regulation to oversee the safety and security of the new power stations. Many experienced staff had left - to join EDF for instance - during the years when there was relatively little UK interest in nuclear energy.