Energy prices have not only risen year after year, but they also appear to be 'sticky downwards'. Ofgem has therefore been under pressure, for many years, to look into allegations that energy companies increase their prices quite quickly when wholesale oil/gas prices rise, but reduce them rather more slowly when oil/gas prices fall.

The industry claims that this is a false perception, resulting from their entering into long-term prices to buy gas, thus protecting their customers from excessive price fluctuations. On the other hand, as noted above, the retail industry is concentrated in the hands of only 6 large suppliers, these 6 don't need to worry about new companies entering the market, and most customers are pretty slow to switch suppliers. There thus appears to be plenty of scope for tacit coordination (sometimes known less politely as tacit collusion) - in other words the Big Six companies will be slow to reduce their prices because such reductions would not gain them market share as they would quickly be copied by competitors. Price reductions would not therefore leave anyone any better off - apart from their customers of course, whom they regard as somewhat less important than their shareholders.

Finally, at long last, Ofgem referred the energy market to the Competition Markets Authority (CMA) (successor to the CC) in June 2014, and a proper investigation into the possble existence of tacit coordination could take place. (Click here to understand the background to this decision.)

The CMA's Issues Statement included the following chart, intended to illuminate the question whether 'prices rise like a rocket and fall like a feather'. And it does indeed appear that the companies' principal tariff rises rather more quickly than it falls, following cost changes.

Explanatory Note:- SVT is a measure of the standard variable tariff. The two lower lines are cost indices, reflecting different approaches to estimating expected wholesale costs. Ofgem’s Supply Market Indicator (SMI) tracks the expected cost by assuming that the supplier has already purchased some of the expected volume in the past through a stylised hedging strategy. The other is the CMA's calculation of a ‘one-year cost benchmark’, which is a purely forward-looking measure of opportunity cost (it takes no account of past hedging decisions). It tracks the cost that a supplier would incur if it were to purchase energy for a typical customer for the following 12 months, based on the prevailing energy prices in that month in the market. 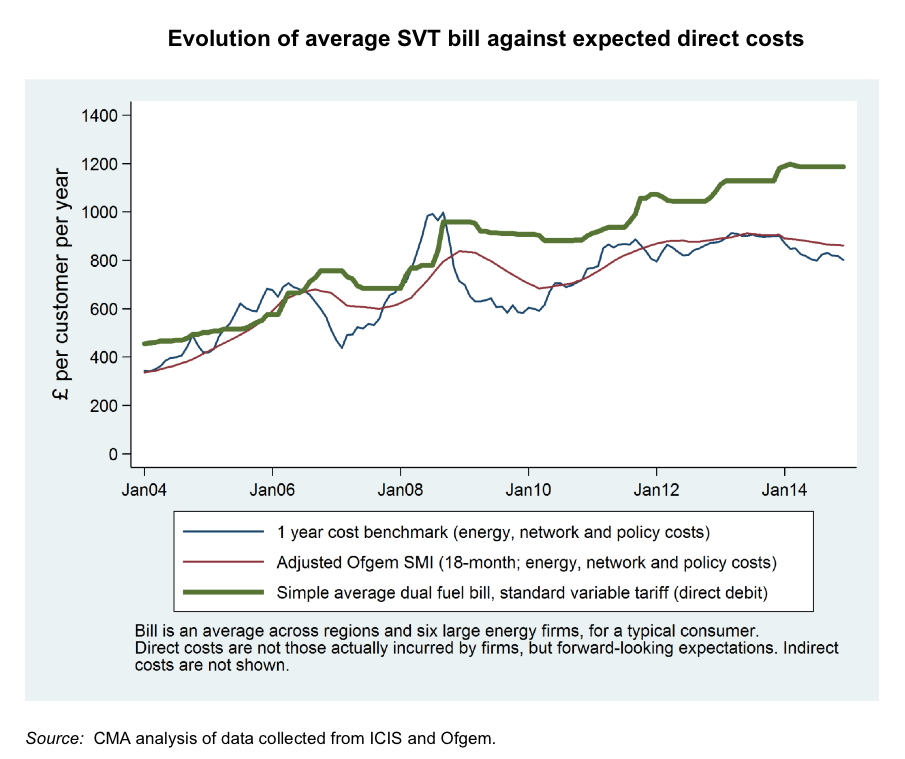 The industry has also itself provided clear evidence of the existence of tacit coordination. As Dieter Helm pointed out, one of CEOs of the Big 6 energy companies, Paul Masera, had claimed in 2014 that the reason why the SVT had not been reduced following the recent big falls in fuel input and wholesale prices was because of the threat of a temporary price cap, in the event of a Labour victory in the 2015 General Election. Such conduct would not have been possible in a competitive market. Imagine an oil company not lowering petrol prices because it might have to lower them in the future. Competitors would reflect the falls in oil costs and take market share.

But it is very hard to 'prove' tacit coordination to the extent necessary to stand up in court. After all, it is by definition tacit - a natural business behaviour of which there is unlikely to be significant documentary evidence.

So the CMA, when publishing its Provisional Findings in July 2015, concluded that there was indeed some evidence of tacit coordination (above - and also stable market shares, and bunched price announcements). But they then noted that there is no documentary evidence, and that other explanations may be possible, and the smaller companies do compete, so they felt unable to draw the necessary conclusion. This was probably a sensible tactical withdrawal, knowing that they would otherwise end up in a lengthy legal battle which they might not win, but it was a disappointing result nonetheless.