This terrible tower block fire in June 2017 caused many to ask whether building deregulation, and reduced inspection and enforcement, may have led to the initial fire spreading in such a devastating way.  A detailed examination of the issues will be found here, updated from time to time as more facts and analysis become available.  See also the Fire Brigade Union's thorough and detailed paper arguing that the tragedy was ultimately caused by political decisions driven by an agenda of cuts, deregulation and privatisation.

Alan Mak MP and others argue that the world stands on the verge of a significant Industrial Revolution, bridging the gap between the physical, biological and digital worlds through new technologies like machine learning, big data, robotics and gene editing. There was an interesting Policy Exchange roundtable in July 2017 which considered how regulation might keep up with disruptive regulation. Follow this link to read a note of the discussion.

The Committee published its review of 2016 impact assessment capability in February 2017 and then its 2016-17 Annual Report in July 2017. Two comments stood out in the second document:

"... departments and regulators overall satisfaction with the RPC process has fallen to the lowest level since the start of the 2015-17 parliament. ... The most common complaints concerned the length of the process and the overall burden the system places on policy teams (especially in relation to small measures).

... next year the RPC will aim to work closely with Government on developing the business impact target and associated framework ... we would especially recommend:

It is definitely worthy of celebration, that the RPC has been in existence for a period of 10 years providing expert independent scrutiny despite the changes we have experienced in both framework and personnel. Over the last decade, our role in government has grown from an ad hoc advisory body to producing opinions on the evidence and analysis supporting new regulations with the opportunity to have a much more direct and positive influence on the quality of proposals. The independent perspective that we offer demonstrates that the government is serious about our role in supporting the better regulation framework.

At the RPC, we have issued around 4,000 formal and informal opinions on impact assessments, post-implementation reviews and cost-to-business calculations across a huge range of areas. When I joined the RPC I was amazed by the breadth of policy areas we cover – from mobile phones to pensions and from the Brexit Withdrawal Bill to biodiversity.

We also recognise the importance of post implementation reviews – PIRs. This is when a department or regulator looks at a policy after it has been implemented for 4 or 5 years to see whether the objectives of the regulation were achieved. This is an important but often overlooked aspect of public policy. We continue to work with departments to build monitoring and evaluation into the policy from the start to enable them to produce and publish higher quality PIRs in future, but there is much more than could be done in this regard.

However we do much more than just rating impact assessments and PIRs:

Since we were set up we have seen developments in our role, such being able to red rate if the impact of regulations on Small and Micro Businesses was not sufficiently assessed and considered – a change which business groups successfully lobbied ministers to introduce.

The recent CMA report on Regulation and Competition recommends extending the current framework to allow us to red-rate if the IA does not properly consider the impact on competition or innovation, and I welcome this proposal as a way to encourage consideration of the dynamic impacts of regulation on the market.

To the suggestions for changes to the better regulation framework, I would also add scrutiny of impact assessments at consultation-stage. This would require departments to submit an IA at the same time as they consult on policy measures rather than this being done on a voluntary basis as it is at present. It would mean that we have an opportunity to comment on and improve the supporting analysis as the policy is being developed. Much more effective than waiting until the decision has already been made.   (This comment referred to the problem that departments only had to send in their assessments just before they are put before Parliament.  But policies have by then been decided upon and it is too late for the RPC's review to grab the attention of Ministers or senior officials. )

The first of the regulators' responses to the Regulatory Futures Review was the FSA's Regulating Our Future published in July 2017. Consistent with the recommendations of that review, the FSA announced the following:

Comment: The FSA's measured prose attracted little attention, but there seems little doubt that its proposals involve fundamental changes to this important area of regulation. The delegation of regulatory activity to the private sector may be sound in principle, but it will require the FSA and primary authorities to be both vigilant and sceptical, for our old friend the 'principal agent problem' is sure to raise its ugly head. And permits to trade, 'hostile environments', and increased business expenditure on assurance schemes and auditors, do not seem to be in tune with the government's regulatory stance.

It was hardly surprising that regulators’ enforcement activity fell during the UK's several years of post-2008 austerity.  But the scale of the reduction was astonishing.   From 2009/10 to 2016/17, real terms funding for the environmental and social protection work of ten key national regulators fell on average by 50%.  The consequential falls in enforcement activity are summarised in this chart prepared by unchecked, an organisation launched in the summer of 2019: 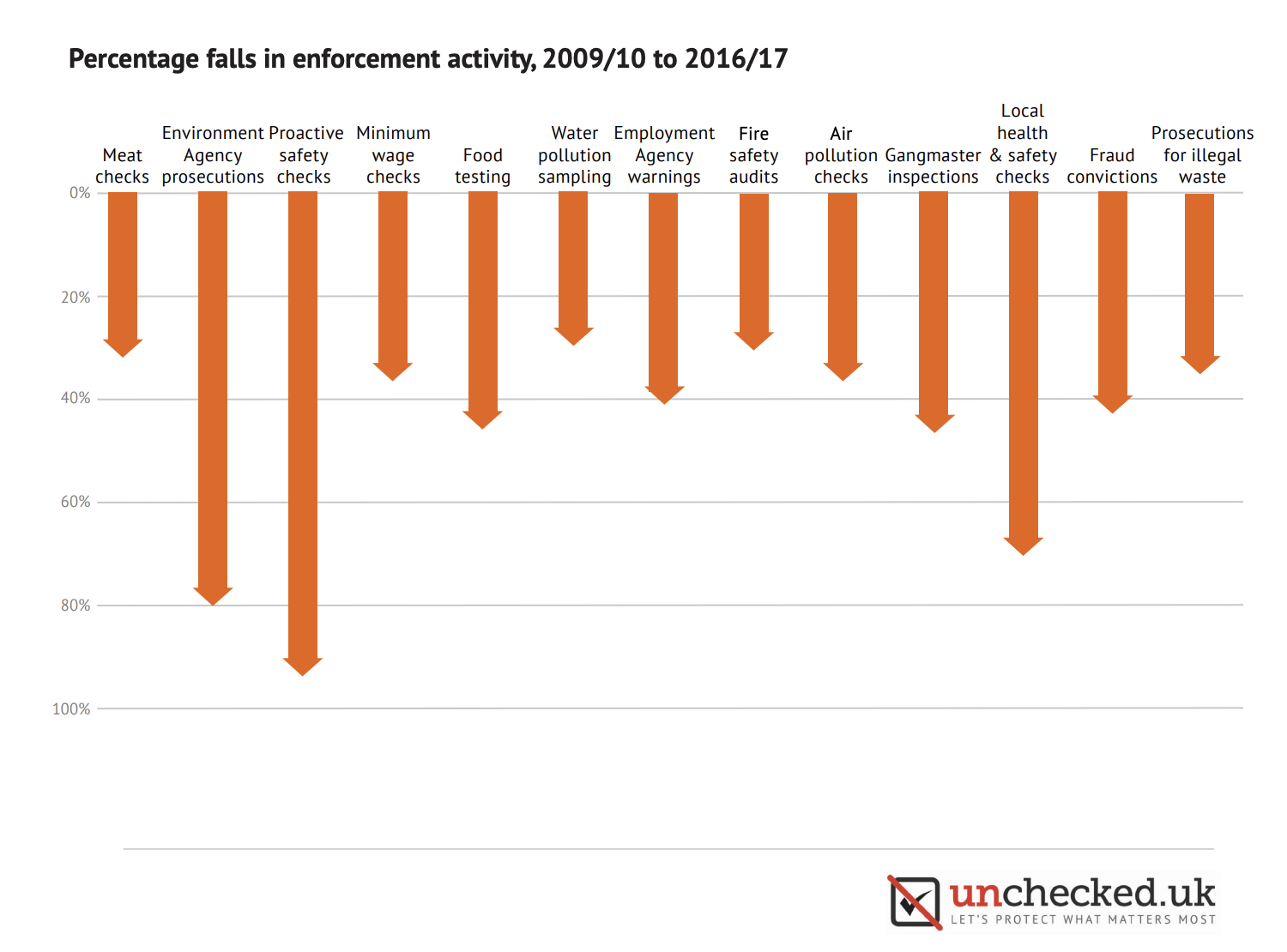 There is much more detail in unchecked‘s first briefing paper The UK’s Enforcement Gap  but a couple of sentences stand out:-

There were suggestions that reduced enforcement over previous months and years may have contributed to the very high COVOD-19 death toll in early 2020, particularly in care homes..

EU law often allows member states to design their own penalty regimes when EU regulations are infringed, as long as such penalties are 'effective, dissuasive and proportionate'.  But HMG appeared to be dropping these constraints when drafting retained post-Brexit EU law, possibly because it wanted enforcement to be more supportive and less dissuasive.  If so, this softening of regulatory attitude could be quite worrying in high risk areas.

Against the above background, it was ‘interesting’ to hear Chancellor of the Exchequer Sajid Javid announce a (post-)Brexit Red Tape Challenge at the 2019 Conservative Party Conference - even though Brexiteers had been noticeably coy in refusing to say what sort of regulations and enforcement might be cut further if the UK were to leave the EU.  Expert reaction, remembering the limited success of the previous Red Tape Challenge, was unenthusiastic.

(The Government's Red Tape Challenge should not be confused with the CBI's document with the same name published in February 2020.  This listed the CBI's priorities for the future UK-EU economic relationship.)

The Reforming Regulation Initiative took the form of an invitation in March 2020 to businesses and the public "to help government ensure that regulation is sensible and proportionate.  We’re particularly interested in the needs of small businesses.  Please let us know how we could improve the system of UK regulation by responding to this short consultation."

Concerned about the post COVID-19 recession.  Prime Minister Johnson announced in June 2020 that he was preparing a 'Great Recovery Bill' to reduce red tape and get the economy moving again.

The Environment Agency admitted in September 2020 that it had reduced the frequency of its checks on lake and river water quality,  and only 14% of rivers had met the criteria for 'good ecological status or potential' against a long term target of 75%.

unchecked updated its 2019 paper in October 2020.   See above for more information about unchecked.  Click here to read the paper.