Railway financing is highly complex. There is a huge amount of information on the ORR website. The following comments and charts merely provide a brief overview of historical trends up to 2016-17. Subsequent falls in passenger numbers reduced the contribution of fares to the total amount of cash needed to keep the railways running.

Annual increases in railway passenger fares are in effect set by the government by increasing or reducing (a) the amount the industry is allowed to invest in new capacity and (b) the annual funding for Network Rail. This chart offers a recent summary of railway income, excluding the fares collected by the open access operators (£0.2bn in 2016-17):

Before privatisation, the government generally increased fares faster than inflation, so as to reduce the call on the taxpayer: 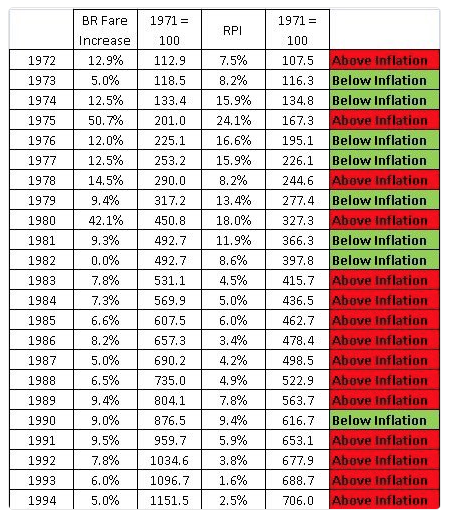 Recent increases have also often, but not always, been higher than CPI inflation. But regulated fares (set by the government, where there is little or no competition - e.g. season tickets) have generally risen faster than unregulated fares where the TOCs have faced competition from road and air. The 2017 figures were 1.8% and 0.8% respectively.

There is a particular issue in that the government has from 2014 been increasing regulated fares in line with RPI, which is significantly higher than CPI. (0.5% higher in the year to July 2018).This represents a hidden reduction in their subsidy. 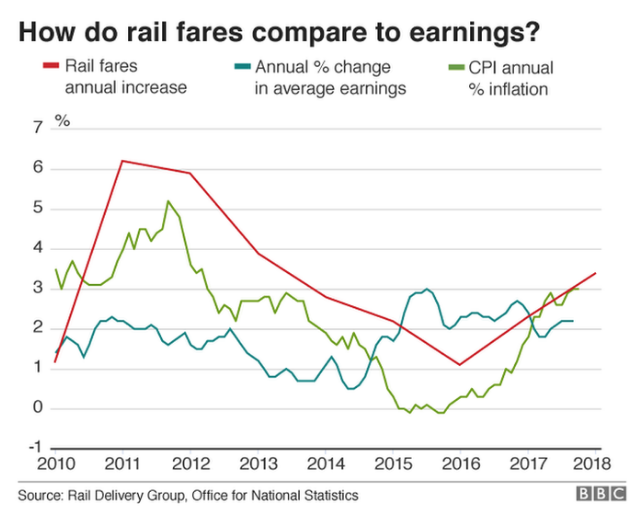 Following privatisation, the taxpayer's total subsidy remained fairly steady - as was no doubt intended and expected - until the shocks caused by two accidents in 1999/2000 followed by the creation of Network Rail. 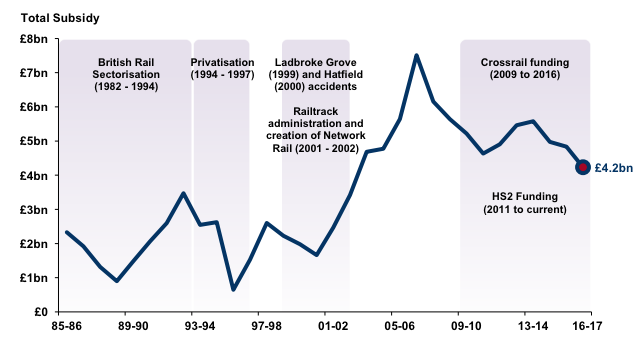 The annual subsidy is now falling. Network Rail received £4.9bn in 2016-17, including £0.8bn for HS2. The train operating companies (TOCs) collectively paid £0.8bn more to the government, for their franchises, than they received in in subsidies: 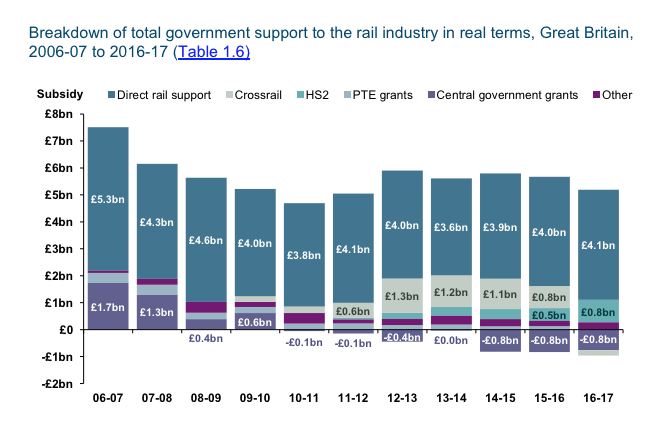 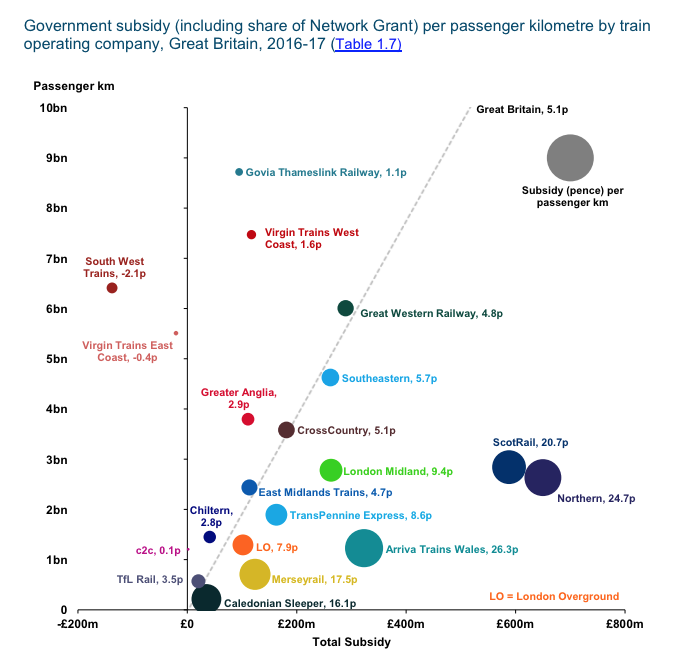 The distributional effect of government support is interesting. Here is an extract from a 2017 article by James Ball:

At present, trains are used far more by the wealthy than the poor. The highest-earning 20% of voters take around four times as many train journeys each year at those in the bottom 40%, and twice as many as those in the middle. Around 70% of people in managerial and professional jobs say they've taken a train in the previous year, versus just 43% of people in manual occupations. Rail use is also highest in the south east – one of the richest areas in the UK – compared with the rest of the country. Sixty six per cent of adults here have used trains in the last year, versus just 40% in Wales.

A fairly obvious and sensible response to the above figures is to suggest this shows trains are already too expensive for poorer adults to use, and so makes the case well for taking action. There a problem with this line of reasoning, though. Put simply, rail fares have been too expensive for low earners for a long time – to make them affordable enough so that poorer adults use them at a similar rate to rich adults would require major cuts to fares, and therefore a major increase to taxpayer subsidy. That would cost considerably more money than fare freezes or capped rises – which are already quite expensive – but would also dramatically increase demand on Britain's already overcrowded railways. Without much more investment, the network would not be able to cope with the huge increases in passenger numbers – and even with greatly boosted investment, it would be a long time until the network was ready to take them on.

Labour’s focus on campaigning on rail fares, then, is essentially a policy offer based around political popularity which would benefit better-off voters, possibly in marginal constituencies. There is an alternative. Focus on bus transport, which poorer workers rely on, and which is becoming less frequent and more expensive in areas across the country.