There has for many years been considerable concern that there may be insufficient competition within the UK banking and related sectors. The 2008 financial crisis then led to concern about the banks' resilience in the face of market turmoil. In particular, are some banks too big to fail?

This web page focusses on the above related issues, but the financial services industry has been the subject of much other regulatory activity in recent years - much if it ineffective. The industry accordingly features heavily elsewhere on this website. Here are links to the principal entries:-

The NAO have also published a good guide to financial services regulation.

But let's get back to competition ...

Back in the 1980s, the Thatcher Government legislated for the Big Bang which transformed the City of London by ending fixed commission charges and breaking down barriers between market makers and traders, so heralding the advent of US-style investment banking in London. One of the key supporters of this policy, John Redwood, described the old cliques that used to dominate the City as "knights in a castle, feasting, jousting and pillaging at the expense of the peasants who live outside". Following the Big Bang, the knights would lower the drawbridge and allow the peasants to share the wealth being generated. Subsequent over-weak regulation unfortunately merely allowed one set of knights - thousands of millionaire bankers - to replace the old City clique.

But the sector hardly escaped regulatory attention. Significant Competition Commission (CC) inquiries into the retail banking sector include that into the proposed merger between Lloyds Bank and Abbey National (for which the CC refused permission) and market investigations into SME banking, current account banking in Northern Ireland, and the sale of Payment Protection Insurance (for both of which the CC imposed 'remedies' aimed at improving the functioning of those markets). Many other investigations were carried out by the OFT and the European Commission. (Box 3 within the Issues paper published by the Independent Commission on Banking listed 24 investigations from 2000 - see below for further information about the Banking Commission.) But it was well recognised that these investigations were merely examining discrete elements of an industry which appeared to have widespread competition problems, whether evidenced by its high profitability, its high salaries and bonuses, or its apparent disdain for its customers, itself evidenced by mis-selling and/or poor service quality. None of these things are by themselves conclusive evidence of weak competition, but you would expect them to be competed away over time as companies fight to gain market share by cutting prices or treating their customers better - but this was simply not happening.

The obvious response was to begin a wide ranging market investigation, but experts agreed that the industry was just too big and too complex for such an exercise to be able to reach appeal-proof conclusions within the statutory time limit of two years. And then there came the 2008 global financial crisis. As well as increasing the depth of concern about the extent of competition within the industry, the extent of competition was further reduced by the need to wave through the emergency acquisition of HBOS by Lloyds TSB on public interest grounds. Wise heads recognised that this decision would look less clever once the emergency had passed - as it did, including to Lloyds TSB shareholders - but there genuinely seemed no alternative at the time.

The Independent Commission on Banking

Andrew Haldane, the Bank of England's Executive Director for Financial Stability, joined others when arguing, in March 2010, that the UK's banks should be broken up into smaller and more resilient units. The incoming Coalition Government elected in May 2010, then lost not time in establishing the Independent Commission on Banking in June 2010. The Commission was headed by Sir John Vickers, previously an impressive Head of the Office of Fair Trading and now Warden of All Souls College, Oxford.

The Commission was asked to take a wide-ranging look at the structure of the UK banking sector, aimed at (a) making banks more resilient and/or more able to fail without undue distress to the wider economy, and (b) making the sector more competitive so that it serves its customers better. In particular, could steps be taken to remove the inducement to excessive risk-taking arising from the perception that some institutions are 'too big to fail' and therefore guaranteed by the public purse? 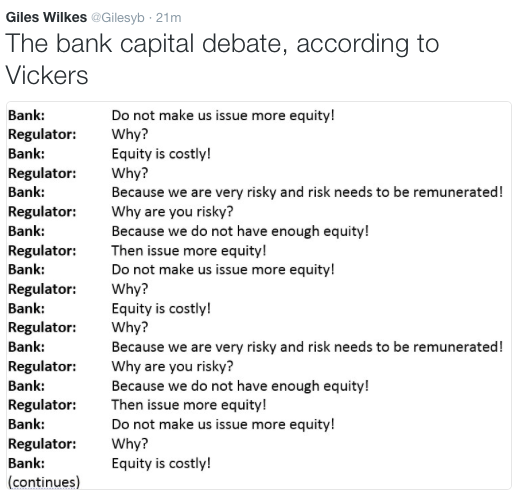 (One consequence of being seen to be 'too big to fail' is that such banks can attract deposits relatively cheaply, as its debts are in effect guaranteed by the government. But its equity is still seen as risky and so it costs a lot to raise equity capital. This in turn encourages the banks to raise as little equity as possible, and borrow as much as possible, so making the problem even worse.)

The Commission was not to look at questions such as the adequacy of capital reserves, liquidity and macro-prudential regulation - i.e. measures intended to improve the stability and resilience of the financial system as a whole - e.g. resilience to cyclical developments.

The Commission published its 'Issues Paper and Call for Evidence' in September 2010. This is a detailed but readable (and must-read) document for anyone seriously interested in this policy area, in which the following were amongst many interesting observations:

The Government accepted the first recommendation but, on the second, said that it intended to set the lending limit at 33 times capital so as to be more in line with international lending limits. The debate on the systemic risk buffer continues and has been neatly summarised by Giles Wilkes - see box above right. The latest salvo from John Vickers, in May 2018, contained the charge that the British banking system still had "dangerously high" levels of leverage. It is certainly worrying that the debate has not been settled ten years on from the 2008 financial crisis, and maybe fewer from the next one.

The Basel Accords and Leverage

It is generally accepted that bankers' increasingly intricate risk models have failed to protect them or the public purse against financial disaster. Models are great if they are modelling stable and predictable, low risk systems, using large amounts of relevant data. But financial systems contain many risk factors and are unstable, globally connected, and poorly understood. Unfortunately, however, the financial great and good have resisted using simple rules of thumb and have instead drafted increasingly complex international agreements to regulate the capital needed by a bank so that it is unlikely to default. The first Basel Accord was 30 pages long. Basel III came to 616 pages which required 1000 pages of primary legislation in the USA alone.

As noted above, Basel III can be boiled down, if you are brave, into a simple rule requiring a capital/borrowing ratio of (a bit less than) 1 to 33. The Independent Commission recommended (a bit less than) 1 to 25. Ex-Bank of England Governor Mervyn King was once asked which simple rules would reduce the danger of further banking crises. He replied with just one simple rule: 'Don't use leverage ratios above 1:10.

The 2008 financial crisis was seen by some as a missed opportunity to "put a spear through the heart of all these guys in Wall Street" [Paul Volcker, former Federal Reserve chairman].

James Galbraith said that " ... one cannot defend the actions of Team Obama on taking office [in early 2009].  Law, policy and politics all pointed in one direction: turn the systematically dangerous banks over to ... the Federal Deposit Insurance Corporation.  Insure the depositors, replace the management, fire the lobbyists ... and restructure and downsize the institutions.  The financial system would have been cleared up.  And the big bankers would have been beaten as a political force."

In the event, all that happened was that the United States authorities introduced stress tests and the Volcker Rule which prevented banks from trading with depositors’ money. It was reported in 2018 that the Trump administration proposed loosening the rule so as to give banks more room for complex trades.

In March 2014 the Competition and Markets Authority (CMA) announced a short programme of work on banking, which would lead to a decision on whether or not to make a market investigation reference to be conducted by a CMA panel of independent members. The CMA noted that 'Based on the OFT’s 2013 findings on personal current accounts and the work to date in the market study of SME banking, there appear to be important similarities between competition issues for personal current account customers and for SME customers'. A full market investigation was then announced in November 2014.

The CMA published its Provisional Findings in November 2015. They were sensible and predictable, focusing on customers' ability to shop around, the impact of free-if-in-credit (FIIC) accounts, the level of concentration in the market (only a small number of large banks plus lots of smaller ones), and barriers to entry. Switching and searching rates were found to be low - and this activity was more prevalent amongst higher income customers. Overdraft customers were accordingly less likely to switch even though they had most to gain. Equally, banks competed less hard for such customers. The CMA accordingly concluded that the market concentration was not a problem, but that low customer engagement, switching etc led to Adverse Effects on Competition, which needed to be remedied.

The CMA's Final report was published in August 2016. Their main aim was to prompt customers actively to consider switching, to raise public awareness of the benefits that might arose from switching, and to facilitate price comparison. There were accordingly no radical measures such as breaking up big banks or ending free in-credit banking. Instead:

Reaction was mixed. Some - and especially the smaller challenger banks - thought that the CMA had 'missed a golden opportunity to shake up banking'. Others thought that the CMA was correct to trust modern price comparison technology, believing that tech-savvy customers would put the banks under much more competitive pressure once the necessary online and mobile tools were available. There was particular praise for the CMA's willingness to engage in remedy-trialling and to encourage prize funds to encourage the development of new technologies.

Gillian Tett, who had tried to expose the industry's problems before the 2008 crisis, wrote ruefully in 2018:

"... if you look at how finance has evolved [since 2008] there are at least five features that seem distinctly counter-intuitive

It was perhaps therefore no surprise that the Financial Times reported as follows in 2019:

The Bank of England has found widespread weaknesses among the UK’s challenger banks in stress tests that showed new lenders cutting corners in an aggressive pursuit of growth. A senior regulator at the central bank wrote to chief executives this week, ordering them to tighten standards and correct “overly optimistic” risk modelling. In what was for some of them a damning assessment, the BoE found that many new lenders displayed an “inability to explain assumptions” in their stress-test models and an “aggressive” focus on growth, even though they tend to make riskier loans.

There were, as far as I know, no negative consequences for the directors or managers of these banks.

This service has been under great pressure and subject to intense criticism since its creation in 2000.  A likely problem is that it does not have enough high quality staff to cope with the volume of complex cases, and this failure may in turn be driven by inadequate industry funding.  But it is noticeable that no-one inside or outside the industry, including the Government, seems remotely bothered by the criticisms.

It is particularly troubling that there seems to be no alternative legal route for most investors to gain compensation from large financial institutions, because it has, over many years, become increasingly hard to qualify for legal aid.