Regulators are under constant pressure to expand their activities, especially so as to protect consumers.  One UK utility regulator observed that his postbag was full of letters which could be summarised as ‘This can be regulated, you are a regulator, let’s regulate it!’

But it is generally the case that customers and competition are the best regulators.  This is because – by threatening to move their custom elsewhere - customers can ensure that suppliers are efficient, innovative and customer-responsive.  The principal activity of economic regulators is therefore the encouragement of effective competition between suppliers or, if this is not possible, by applying similar pressures themselves through price controls, for instance.  Two separate sections of this website are devoted to this activity, which is generally known as economic regulation, and which can conveniently be divided into competition policy and utility regulation,

But otherwise effective markets do - too often - fail to protect consumers. The rest of this note considers the extent to which it makes sense to intervene in such markets to protect the interests of consumers and smaller firms.

Why do markets often fail to protect consumers?  How, in a rational market, could a product like Payment Protection Insurance (PPI) - with premiums adding 20% to the cost of a loan and a claims ratio of only c.16% - have sold in the numbers it did, and to people who couldn't claim on them?

Let’s begin by asking ourselves whether our own behaviour – or the behaviour of our employer – might need to be regulated:

Would we, when selling a car or a house, ensure that a prospective purchaser is aware of all its faults, such as:

Would we work for a business which:

The fact is, of course, that many if not most of us would do these things.  Indeed, we have almost certainly acted in one or more of these ways if we work in the financial services or ICT industries, or for a supermarket or an airline.  Why are we willing to behave in these ways?  We are certainly not doing unto others as we would have them do unto us.   Instead:

But ‘buyer beware’ and ‘devil take the hindmost’ can seem very harsh and unfair.  So customers and consumer bodies often press for some or all of the above behaviours to be regulated or even prohibited.  Their arguments fall into three broad groups: (a) economics, (b) limited information, and (c) the protection of disadvantaged customers.

Economists and competition authorities keep a close eye on the behaviour of dominant companies such as Microsoft, Google and Apple (see also my competition policy pages) as well as the big utility companies (see utility regulation).   In particular, such companies are not generally allowed to price discriminate – that is to favour particular customers with lower prices than others.  This is because such targeted discrimination can be used in an unfair way to stop customers switching to competitors.  For similar reasons, dominant companies are generally expected to post cost-reflective prices.

This has led some to argue that price discrimination and non-cost reflective pricing are pretty well always undesirable.  But this is an over-reaction.  The modern fast-moving consumer market consists of lots of small-scale experiments which test customers’ attitude to pricing and other models.  There is therefore no ‘in principle’ objection to

But note that such tempting offers are subject to more justifiable criticism if their negative attributes are hidden, unclear or presented in a confusing way.  (See ‘Limited Information’ below)

Politicians and regulators understand very well that most consumers cannot be expected have anything like as much product information as the person selling the product.  (This is known as information asymmetry.) There is therefore a large number of regulations which protect those buying medicines, investment products and other items (such as cars) whose quality problems might not become apparent for some time, and whose failure might be seriously damaging to health or wealth.  More generally, there is nowadays some quite extensive consumer protection legislation which requires facts in advertisements to be broadly accurate, and so on.

But there is little or no protection against many of the practices summarised at the beginning of this note.  Drip pricing is generally allowed, as is the sale of medicines of dubious value and other dangerous or strange products.   We are, for instance, all free to buy both cigarettes and ‘infoceuticals’ which, we are told, ‘are not chemicals, herbs, nutrients or homeopathic remedies.  Instead they contain micro quantities of colloidal minerals whose subatomic structure has been scientifically encoded with information needed to restore integrity to the human body field.’  We are also free to pay whatever we like for houses and investment products even if the vendor is well aware that they are poor value for money.  We often take advice if large amounts of money are at stake, but we are not required to do so.

It is interesting to debate whether more should be done to protect us.  As noted above, many otherwise reputable businesses are quite unscrupulous when it comes to deploying tactics such as drip pricing, or relying on our financial ignorance to sell us poor value products.  (I understand, for instance, that 21% of UK adults cannot calculate 10% of £100.  Surely the relevant regulator should intervene!)

The alternative argument is that regulators would then be taking on an impossible task, because there would always be an argument that the next device or exaggeration should also be banned.  It is surely better that consumers should be expected to be on their guard.  And maybe it is no bad thing that those customers who read appropriate newspaper columns and shop around should benefit from this activity as compared with those who do not.  The banks were eventually forced to pay around £6bn compensation to those who were mis-sold payment protection insurance, but those who bothered to take an interest in such matters had known for many years that such insurance usually offered very bad value.   Why should they (through their pension scheme investments in the banks) be forced to compensate the less aware?

In contrast, although much the same issue arises in the case much point of sale insurance (e.g. for electrical and white goods), there has not as yet been any successful claim for compensation.  It is interesting, too, that the courts have shown themselves unsympathetic to legal attacks on arguably excessive bank charges (e.g. for unauthorised overdrafts).  The UK Supreme Court held that such charges are clear, well known, and part of the banking service, even though they bear little or no relation to the cost of providing e.g. the unauthorised overdraft.

Similar arguments apply in the case of energy pricing.  Ministers, Ofgem, and consumer bodies such as Which? constantly promote the virtues of active switching e.g. between electricity suppliers.  Indeed, Ministers are clearly tempted to do more and force suppliers to switch customers to more favourable tariffs.  But it is perhaps hard to justify such a strong intervention in this market over others, especially as it is surely in the interest of electricity companies themselves to promote the advantages of their cheaper tariffs – at least to customers of other companies.  (It is possible, of course, that the companies are not in fact competing because they are tacitly colluding in keeping their prices high.)  A more detailed review of energy market regulation is here.

Here, finally, the arguments in favour of regulation are much more clear cut.  There is little dispute that regulators have a duty to ensure that young, poor, disabled, elderly, rural or otherwise disadvantaged customers need to be protected against exploitation along the lines summarised above or in other ways.  Most if not all economic regulators ensure that their companies behave reasonably well when dealing with such customers.

Indeed, it was interesting to note that New York's Attorney General launched an investigation into hundreds of complaints of prices being increased in the aftermath of tropical storm Sandy in November 2012.  The largest number of complaints concerned increased fuel prices, but other emergency supplies were also affected.  "Price gouging" of essential consumer goods is forbidden under New York law.  The term is similar to (legal) profiteering but can be distinguished by being short-term and localized, and by a restriction to essentials such as food, clothing, shelter, medicine and equipment needed to preserve life, limb and proper 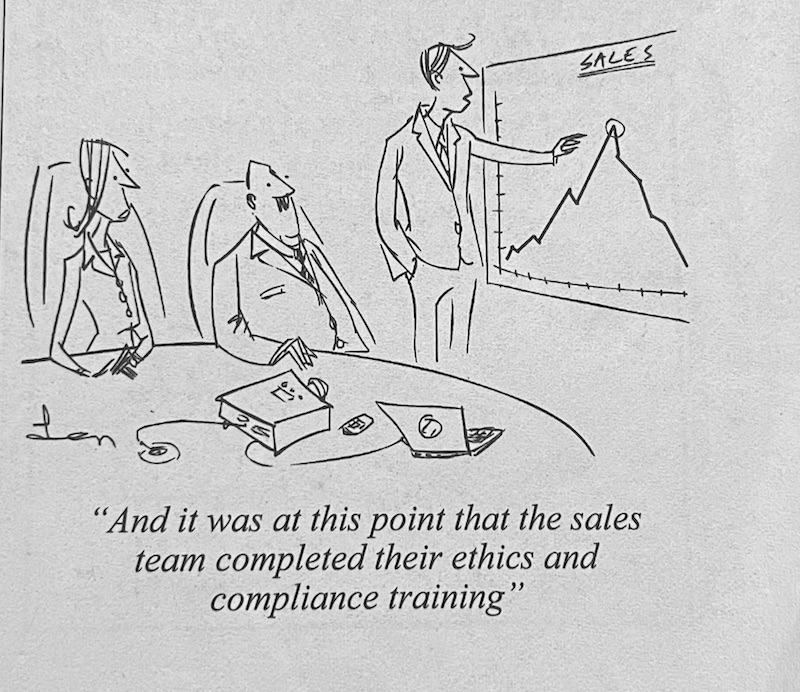 Maybe the underlying issue is ethical?

I suspect that most of us would, at one level, abhor the behaviours listed towards the beginning of this note.  And yet most of us have behaved in at least some of those ways, as employees or when dealing with strangers.   Where is the boundary?  When does behaviour allowed by caveat emptor become unacceptable?

Politicians and other opinion-formers do not seem to believe that exhortation or shaming are generally effective in protecting the public.   The City of London used to be very effectively regulated by the Governor of the Bank of England and his eyebrows.  In short, if the Governor expressed concern about your behaviour by metaphorically raising his eyebrows then you very quickly got back into line.  But that method did not, and perhaps could not, survive the ’Big Bang’ and the arrival in London of the big American and other foreign-owned banks.

But we have seen all too clearly that, if left to themselves, businesses will often engage in a ‘race to the bottom’ as ‘bad drives out good’, with pernicious effects not just for their customers but also for the efficiency of the wider economy.  It is surely not good for UK plc that Michael Skapinker can point out that ‘retail banks [main] aim is to sell you products you don’t want and to rip you off when you are not looking’.

There are occasional public reactions; for instance, in late 2012, against multinationals’ tax avoidance.  But the companies are pretty adept at riding out such storms including by making PR-driven placatory gestures.  The fact remains that senior executives believe that their main duty is to further their shareholders’ interests by increasing their profitability in any way they can, within the law.  Loopholes, vagueness and subjectivity are there to be exploited.

Politicians and the media are responding by leaning more and more on regulators, but that doesn’t solve the problem, for regulators are never told that caveat emptor, and the primacy of the duty to shareholders, no longer apply.  Regulators are therefore forced to make difficult subjective decisions about where the line is to be drawn, knowing that any aggressive decisions will certainly be challenged in court by a well-funded industry, whereas there is no counterbalancing legal pressure on behalf of customers.

Maybe we need a totally new approach – a change in corporate culture?  It takes a long time, of course, to change established norms.  So maybe company directors should be put under a duty to operate with integrity? Maybe there is something to be said for requiring directors - and their advisers - to ensure that their businesses operate in good faith, so to speak? Deception of any form might be banned.  One solution may therefore lie in company law. Another might be to strengthen the existing codes of banking practice etc.

In the absence of a totally new approach then a halfway house might be good.  It is not too difficult to imagine a world in which shared business values make life very difficult for rogues.  Other businesses would not sell to them.  Banks would not lend to them.  We might hesitate to approve of such judgmental behaviour, but there is surely little harm in it.  The alternative is for politicians or regulators to write very detailed rules that discriminate between desirable and undesirable opportunism - and then employ enough staff to enforce those rules.  This seldom works, it's expensive, and the regulations impose unnecessary cost on honest business.

Much utility and financial services regulation is intended to protect consumers.  This web page will lead you to further detail.