The Public Sector is - quite rightly - very highly regulated. But this regulation comes with great cost and may often have gone too far, or have been badly designed.

This problem was formally recognised by the Cabinet Office in the late 1990s when its Regulatory Impact Unit, working closely with other departments, began to publish a good deal of useful guidance and other material.

Baroness O'Neill then drew attention to the pervasive tendency of government to allow holding to account to morph into managing from afar. Managers of many hospitals, schools etc. had begun to focus almost exclusively on meeting targets as distinct from providing excellent and locally appropriate health care and education.

She also stressed that, in this area as well as others, there is a crucial difference between releasing information and informing the public. The wholesale release of vast amounts of data does not of itself inform anyone.

Read on for more detail ... 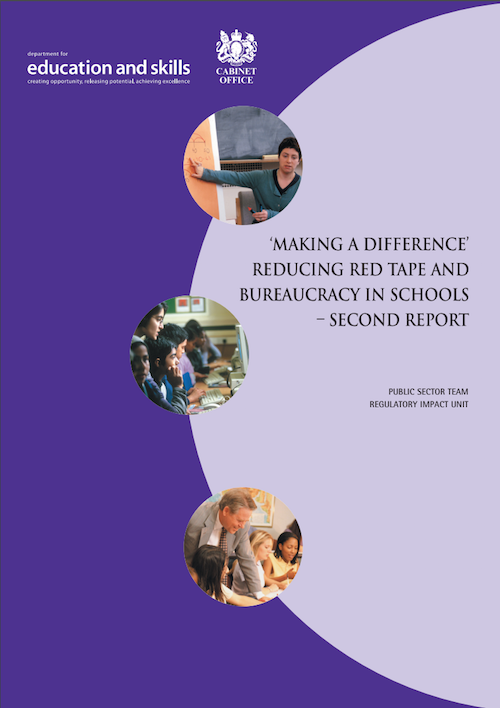 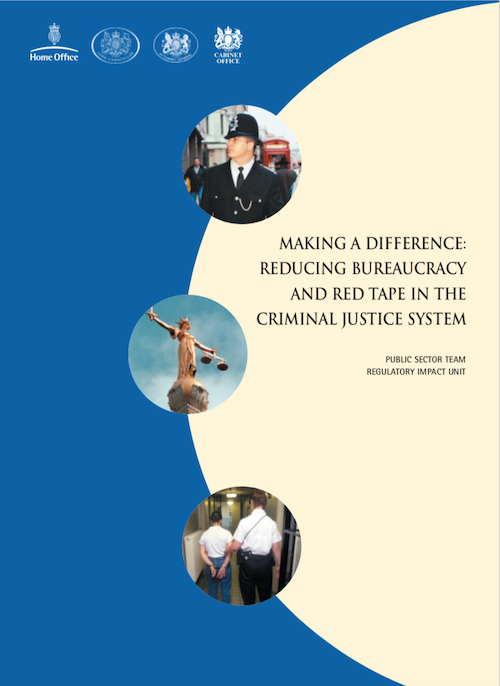 The RIU's interest in public sector regulation began with a scoping study in 2000. Its Executive Summary is here. There then followed a number of reports including;

A 2007 public sector strategy ‘Cutting Bureaucracy for Our Public Services’ sought to reduce the amount of unnecessary bureaucracy faced by frontline public sector workers. [More information about this would be helpful.]

Further information about the RIU, better regulation, deregulation and all that may be found via the Better Regulation menu on the home page.

Baroness Onora O’Neill published a magnificent critique of public sector regulation in A View from "Near Abroad". It is well worth reading the whole article but here are some extracts which summarise her argument:

The distinction between management and accountability has been increasingly blurred for those working in the public sector.  The blurring is particularly evident in the big public sector institutions such as the NHS, schools and universities.  All are assured that they must manage themselves, and that they are not managed from, but are rather accountable to, Whitehall.  Yet the ways in which funding is provided, in which targets are set, in which information is required, in which performance is measured and monitored in abstraction from primary tasks, and sanctions are organised, often converge with and become indistinguishable from management from afar.

Both health and education offer vivid—indeed notorious— examples of the ill effects of managing from afar rather than holding to account.      For example, secondary school examinations have been distorted over many years by creating excessive incentives to ensure that more and more pupils obtain the magic 5 GCSE passes with grades of C or better.  …  The bizarre, yet I think predictable, result of schools and pupils ‘gaming’ the system has been that while half of the age cohort now obtain the 5 desired passes, only a third obtain them in the three required subjects of English, Maths and Science.  The A to C grades are easier to get in subjects that are judged less central—and that matter less to future employers.

Meanwhile—in other rooms in the same Department of State—somebody set a target for 50% of the age cohort to go to University, without apparently noting that two thirds of the age cohort do not reach a satisfactory standard in English, Maths and Science at age 16.  At a later date— perhaps in yet another room in the same Department— the circle was squared by putting forward legislation that gives universities an additional regulator (OFFA) to ensure that they improve ‘access’ for underrepresented groups in order to achieve this target. Nobody has yet explained to the Universities how they are to bring the approximately 16% of the age cohort who did not even get C’s in the core subjects at GCSE to degree standard in any subject, traditional or modern, academic or vocational. (The received answer to those who voice this wonder is that it is not a problem since the target is for 50% to get there by age thirty—whether by endless retakes or by dropping standards remains unclear.)

The glass of regulatory excess is supposedly nearly drained [but] I think the picture is one of sporadic change, [and] far from reassuring.

The Better Regulation Task Force has published a number of trenchant reviews of the impact of excessive and intrusive regulation, including the encouragingly titled Higher Education: Easing the Burden, to which Government responded positively.   Some welcome changes occurred. Nevertheless, the Higher Education Act 2004 introduced two new regulators for Universities (the Office of Fair Access and the Office of the Independent Adjudicator).   A small browse of the HEFCE website shows that control remains very detailed.

Indeed, the present system has created large difficulties for government and for the civil servants.      By taking increasing control of the delivery of public services, governments come to see themselves and are seen by others as being accountable to the electorate for delivery of those services.    A poor school cannot then be blamed on a dysfunctional LEA or an aberrant head teacher.  Every failure in a school or hospital is liable to be seen as a case of government failure, of government missing its targets, or failing to improve public services.  Both opposition parties and the media are quick to point the finger.  Government is hoist by its own petard.  It is now blamed for crowded waiting rooms, poor school discipline  (and meals!) and for delayed operations.    The system may not be one of central planning, but it has became one in which failure at any point in the public services is blamed on government—although they ostensibly to do not manage the services that failed.  No wonder that those who take the blame seek to reduce the problem by constantly altering and adding to the ways in which they control those who actually deliver services.    There is some irony in this outcome.

Baroness O'Neill, in the same article, also had some very sensible things to say about 'transparency' which is a key aspect of many regulatory interventions in the public sector - Ofsted reports, hospital consultant death rates etc.:-

There are not many critics of transparency these days.  I think this is a pity, since it is a defective ideal.   Transparency requires information be made available, which may be better than secrecy in many cases.  But it does not require that information be communicated in ways that are accessible to and useful for particular audiences.  Good communication has to be audience sensitive: mere transparency can shirk this demand.  Like the other one-sided communicative ideals of disclosure, dissemination and self-expression, transparency does not demand good or honest communication with specific audiences—or indeed with any audience.   It is generally achieved by two methods.  The first is to put government documents  (often long and prolix; seldom thrilling) onto Departmental websites, which is useful for specialists.  The second is to disseminate limited tabular information that looks disarmingly simple, yet cannot be properly interpreted without considerable expertise for the wider public.

Many of the managerial demands placed on the public sector have the secondary purpose of securing transparency by generating information that can be published for the public at large, or for groups of ‘stake-holders’.        ‘Simplified’ comparative information about the performance of hospitals, schools and universities is compiled and published in the tabular form, usually in the form of league tables.  Anybody can see who comes top or bottom, and the need for communicating information to wider audiences is supposedly satisfied.

However, not everybody can see behind these simplified tables and rankings, or interpret their significance.  Evaluating the performance of a pupil or a school in the round is quite difficult.   School reports on individual pupils and Inspectors’ reports on schools are generally more useful for this task.  Equally, judging the quality of a university course or of a hospital, or the performance of an individual doctor, nurse or student, is not best achieved by league tables.       For league tables are not designed to reveal quality of performance, but at most to compare and rank quality of performances.  In some cases even those who come top may be performing at a mediocre level; in others those who come bottom may doing satisfactory work.  All of this is well known, and those who deal with league tables are conscious of the pitfalls. However, the wider public with less time and less expertise may be misled.

The current emphasis on transparency creates an illusion that communication is a simple matter, even something that can be handed over to expert communication strategists with little experience of the content to be communicated.   In fact it is always hard to communicate well about complex matters.

If you enjoy A View from near Abroad, you might be interested in some suggested further reading on Trust, Trustworthiness and Accountability kindly compiled by Baroness O'Neill.