My Introduction to Regulation summarises the factors that have driven much of the explosive growth in regulation since the 1980s. It now looks as though the world may have entered a further Industrial Revolution in which the physical, biological and digital worlds are coming together in the form of new technologies such as machine learning, big data, robotics and gene editing. Modern technologies cut costs and facilitate activities which would otherwise be impossible. But they create other costs and unforeseen consequences that are undesirable. This web page contains some initial notes on the consequences for regulation.

The regulation of this new world is likely to be very complex, very varied and very detailed. An analogy might be drawn with the way that road traffic, vehicle construction, emissions and other regulation has developed over the many decades since petrol driven cars first appeared on our roads. Writing in the New Scientist, Douglas Heaven pointed out that ...

The trouble is, robotic intervention into human affairs is going to require something far more comprehensive than the highway code. Legislation that protects passengers and pedestrians from driverless cars, for example, will be powerless to stop data-scraping algorithms from influencing our vote. Medical robots programmed to diagnose and treat people will need different regulations from those sent onto the battlefield. ... There is another hurdle, too. Interpreting rules requires common sense. It’s not clear how you would encode even the most obvious of commandments in a way that a machine could be trusted to follow ...

Another preliminary comment:- It is vital that regulatory frameworks are pro-competitive so that innovators can test their ideas. It is a mistake to have a regulatory framework which requires every innovation to be challenged before it can be put into practice. But it is equally important that potentially dangerous technologies are properly evaluated before deployment.

Nesta have done some interesting work on Anticipatory Regulation, including publishing a thorough report Renewing regulation in 2019. Nesta and other argue that regulators must not merely react to issues raised by the introduction of new technologies, but must actively anticipate the need for new forms of regulation, not least so as not to impede innovation and associated economic growth. The UK government has responded by establishing the Regulators' Pioneer Fund.

One of the most interesting regulatory innovations in the UK is CMA-mandated Open Banking. Indeed it has been suggested that this could be a example to be followed in regulating Big Tech - Google and the rest.

Another is the NESTA-led Flying High research programme looking at the future use and regulation of drone technology in UK cities.

There are of course many other examples of regulatory experimentation and innovation, often described as regulatory sandboxes, or innovation hubs, or RegLabs. They might be seen as 'safe zones' for experiments - and their tests should therefore be properly and carefully conducted, like scientific experiments.  The changes from the established regimes - and the resultant risks - need to be recorded in detail and understood by all participants The risks then need to be mitigated as necessary, and results carefully measured and openly reported. Organisers also need to beware the Hawthorne Effect (where improvements driven by process changes disappear once the experimental spotlight is removed, along with the associated psychological and other incentives.)

There are two large areas in which there is intense discussion of the possible need for regulation.

The first includes a number of issues connected with the growth and power of the Internet Giants - Google, Facebook and the rest. These separate web pages go into some detail:

The rest of this page lists some other areas where there seems to be an emerging need for new or different regulation.

Climate change is clearly a big regulatory issue. My Energy Regulation pages look at the implications for UK energy policy. where price rises caused by pro-renewable and pro-nuclear policies have met considerable resistance.

Environmental protection costs also loom large in Water Industry Regulation And the UK government in 2018 started pressing for international action to clean plastics from the oceans.

But there is bound to be more to come. The world's population is still increasing very rapidly. having reached 7.8 billion in 2018. Average fertility rate - around 2.5 per woman in 2018 - is still way above the steady state figure of 2.1. There is loads of room for argument about the maximum population that the world could sustain, but - whatever it is - it can only be reached as a result of international regulatory cooperation.

Competitive computer games are big business nowadays. Valve Corporation, for instance, hosts an annual international DOTA tournament where professional teams compete for a prize pool which had reached $25m by 1017. Intriguingly, however, DOTA is free to play - but the prize pool is funded through the purchase of 'compendiums' - self-updating, interactive booklets that track the tournament's statistics. It is less obvious, however, that Valve creams off 75% of the purchase price before transferring the balance to the prize fund. Nice work if you can get it! But is it abusive? Or are customers deserving of greater protection?

It is also interesting that many in-game purchases open 'loot boxes' whose contents are unpredictable. It's a relatively gentle form of gambling - but it has, as such, been banned in Belgium and the Netherlands. One (perhaps slightly exaggerated) comment explained players' reasoning as follows:- "99% of people who open these things are going for the rares; otherwise it'd be cheaper 90% of the time to just buy it off the market and not play the odds.".

Information technology is facilitating new ways of ordering goods and services to be delivered to the door, including books (and much more) from Amazon, taxis (in particular from Uber), food etc. (from supermarkets), and meals (Deliveroo etc.).This is to be welcomed,. (See for instance Robert Hahn and Robert Metcalfe's The Ridesharing Revolution.) But there are some unwelcome consequences.

First, the gig economy facilitates new and arguably onerous ways of employing those who prepare and deliver many goods and services. They can be required to enter into contracts under which

These arrangements can be tax efficient for both 'employer' and 'employee' and they suit many individuals very well. But they can also be exploitative, leaving workers without essential protections. It is far from clear that one-sided contracts are in the long term interests of the individuals or society. Numerous cases are working their way through the courts as lawyers seek to define the boundary between being a 'worker' and being truly self-employed.

The self-employed also pay much less by way of National Insurance Contributions (NICs) despite the fact that, since the introduction of the new state pension in 2016, they get pretty much the same state benefits as employed people. The government attempted to address this by increasing NICs in 2017 but this proved very unpopular and was abandoned. The proposal also appeared to pre-judge or forestall the recommendation of the Taylor Review of modern working practices published a few months later. (See also my web page commenting on weaknesses in HMRC.)

The gig economy can also be economically devastating for those previously sheltered from such competition. Here is an extract from a report in the New York Times.

For decades there had been no more than 12,000 to 13,000 taxis in New York but now there were myriad new ways to avoid public transportation, in some cases with ride-hailing services like Via that charged little more than $5 to travel in Manhattan. In 2013, there were [already] 47,000 for-hire vehicles in the city. Now [in 2018] there were more than 100,000, approximately two-thirds of them affiliated with Uber.

While Uber has sold that “disruption” as positive for riders, for many taxi workers, it has been devastating. Between 2013 and 2016, the gross annual bookings of full-time yellow-taxi drivers in New York, working during the day when fares are typically highest, fell from $88,000 a year to just over $69,000. Medallions, which grant the right to operate a taxi in New York City, were now depreciating assets and drivers who had borrowed money to pay for them, once a sound investment strategy, were deeply in debt. [NY Taxi Drivers representative] Ms. Desai was routinely seeing grown men cry and she had become increasingly concerned about the possibility that they would begin taking their lives.

There is a separate issue concerning the companies' willingness to adjust to local culture and regulation. The BBC commented in September 2017 that "Throughout its short, tempestuous life, Uber has clashed with regulators around the world - and more often than not it has come out on top. Its tactic has often been to arrive in a city, break a few rules, and then apologise when it's rapped over the knuckles. Some regulators have backed down, others have run the company out of town."

In the UK, Transport for London (TfL) have been prominent in attempts to regulate Uber in the same way as they regulate other taxi providers. The Court of Appeal, for instance, backed TfL's insistence that Uber provide a facility for passengers to talk to the company over the phone (or a voice call overt the internet) if the passenger does not want to use Uber's app for this purpose. And, having been threatened with the removal of their licence, Uber eventually conceded a string of safety failings before magistrates gave it a 15 month probationary licence running from June 2018. The judge criticised the company's 'gung ho" attitude and its attempts to "whip up public outcry" by launching a public attack on TfL rather than accepting blame for its mistakes and misbehaviour. Uber's probation was made subject to 14 conditions including adding independent members to its Board. ...

... But TfL again refused to renew Uber's licence in 2019 when it identified a key safety issue:- "a change to Uber’s systems allowed unauthorised drivers to upload their photos to other Uber driver accounts. This allowed them to pick up passengers as though they were the booked driver, which occurred in at least 14,000 trips".  This meant that all journeys were then uninsured and some of the drivers were unlicensed and/or had been dismissed or suspended.

Uber's entire business model is predicated on a crowd-sourced evaluation model. Every driver gets rated every trip and I can see my driver's rating well before they pick me up. And because Uber couldn't be bothered to spend the money on photo verification screening, you might have been picked up by someone you thought was a properly screened 4.8 star Uber driver with 10,000 rides, but who was in fact an unlicensed sex offender without insurance. 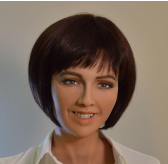 The Foundation for Responsible Robotics published an interesting report Our Sexual Future with Robots in July 2017. The report discussed whether increasingly lifelike robots, such as Sophia on the right, might:

The pace of change in this area certainly seems likely to require some form of regulatory response before too long.