2021 began with the government simultaneously tackling the COVID-19 pandemic and the problems caused by the end of the Brexit transition period.  It was perhaps therefore no surprise that it announced that it did not intend to cut overall regulatory burdens on business over the current parliament, pending a review.

The Prime Minister was reported to have asked business leaders, in a conference call, for deregulatory suggestions that could be presented as a Brexit dividend.  "A government source" talked about "the UK becoming a low tax, low regulation regime like Singapore".  Other ministers were also reported to have made similar requests in the first months of 2021.

The Taskforce on Innovation, Growth and Regulatory Reform, chaired by Iain Duncan Smith, was announced in February 2021 and posed pretty much the same question.  It was asked to report in April.

It was reported in February 2021 that Chancellor Rishi Sunak was to chair a new Better Regulation Committee to 'help stimulate growth, innovation and ­competition in the UK, while attracting new investment, enabling businesses to grow dynamically, and maintaining the high standards the UK has consistently championed in areas like workers’ rights'.

Those not involved were half-amused, half-angry that a government that had championed the benefits of Brexit could not immediately identify what it wanted to do with its new freedom.  Giles Wilkes encapsulated many observers' reactions in these tweets:

It's always the same. Someone chunters on about how what we need for growth is regulatory change. But they're not sure what. So they issue a plea to business/the public. It's like asking someone else to provide the punchline to your own stupid joke

My *first day* as a spad, a well known business organisation slaps down on my desk a list of 100 regulatory problems from members. Hooray, I think: actual content. Leafing through - about 98 were variants on "I find it tiresome having to make arrangements for pregnant staff"

It was announced in May 2021 that Cabinet Office Minister Lord (David) Frost, who had negotiated the Brexit agreement, was recruiting the Head of new Cabinet Office unit to explore 'Brexit opportunities' particularly around shedding EU regulations.

The press were briefed in February 2022 that Ministers were closing in on a deal with City watchdogs to unleash what Prime Minister Johnson called an 'investment big bang'.  They wanted in particular to reform the insurance industry's Solvency II rules in the hope that this would allow insurance companies to invest much more in infrastructure, including green energy projects.  But Ministers failed to acknowledge that the EU had announced its own review of the rules in September 2021 so the UK was playing catch up, and was not likely to be able to claim that any deregulation had been greatly facilitated by Brexit.

The Government's Benefits of Brexit paper killed off the possibility of resurrecting anything like the 'one in, two out' system of deregulation.  'While there are many benefits to such a rule ... we do not think it consistent with delivering world-class regulation to support the economy in adapting to a new wave of technological revolution or to achieving net zero.'

Jacob Rees-Mogg was appointed Brexit Opportunities Minister in February 2022 and was, we were told, ordered to come up with 1,000 EU rules to scrap.  He in turn asked members of the public to come up with ideas, including via a prominent story in the Sun.  It remained unclear why this exercise was necessary, given that Brexiteers might have been expected to have lots of ideas even before the 2016 referendum, and certainly afterwards. 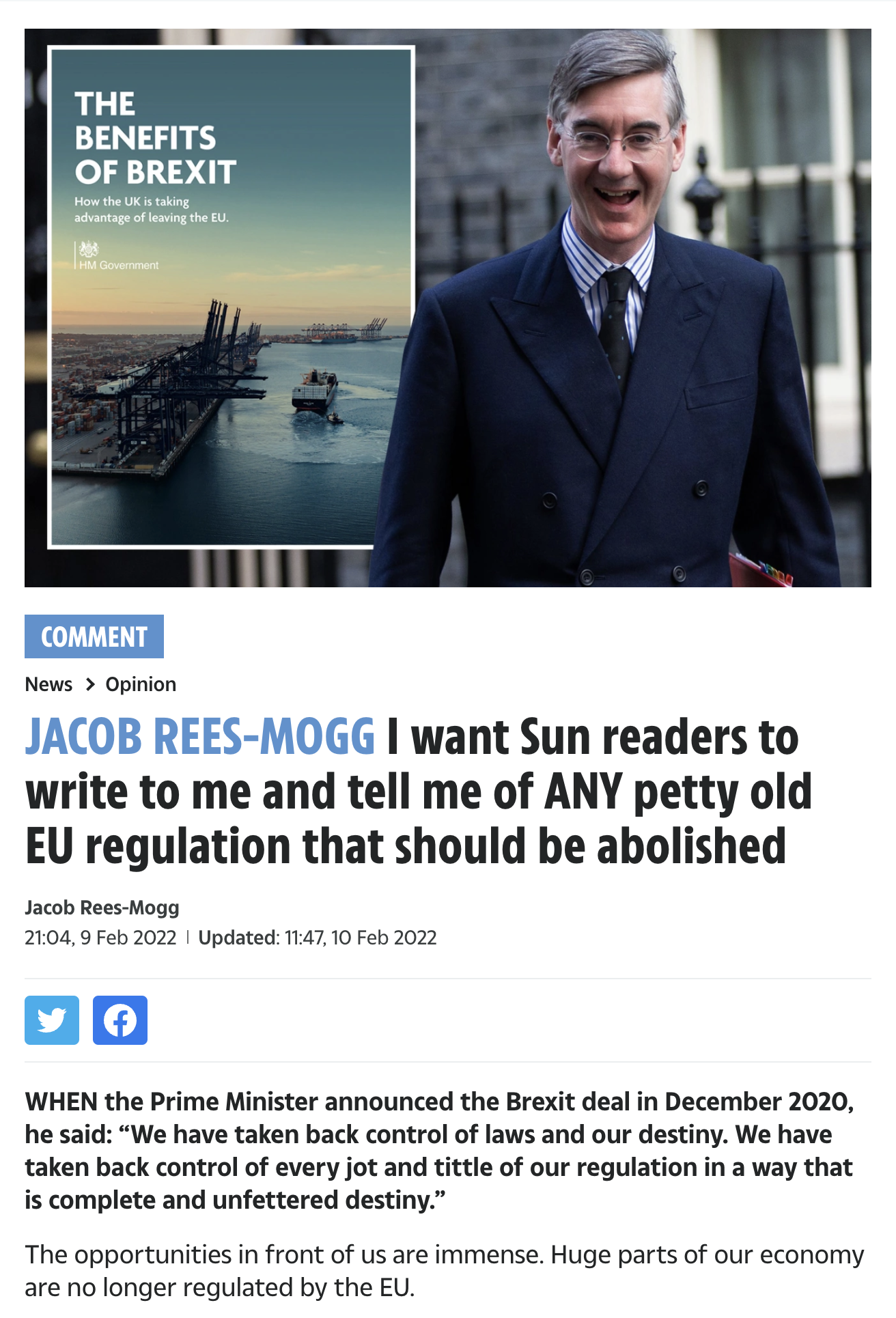 The FT's Peter Foster summarised the state of play, as at mid-May 2022, as follows (emphasis added):

The deregulatory ideas emerging from the consultation in the Sun and elsewhere were reported a few weeks later.   None of the ideas were inherently ridiculous although they would all roll back various protections which were presumably once seen by many to be necessary.   Chris Grey commented that 'Almost without exception they are things which don’t require Brexit or are trivial, or both, and very likely nothing will come of them anyway. In that sense, the very call for suggestions can itself be regarded as symbolic of ‘listening to the people’ or, alternatively, of how bereft of ideas the Brexiters in general, and Rees-Mogg in particular, actually are.'

Here is the report in the Daily Express - but note that these are 'nine of the top ideas' (chosen by Mr Rees Mogg's department).  They were not necessarily the nine most popular:-

'Nine of the top ideas named from the department are:

1. Encourage fracking, shortcut rules on planning consultation via emergency act.
2. Abolish the EU regulations that restrict vacuum cleaner power to 1400 watts.
3. Remove precautionary principle restrictions (for instance) on early use of experimental treatments for seriously ill patients and GM crops.
4. Abolish rules around the size of vans that need an operator's licence.
5. Abolish EU limits on electrical power levels of electrically assisted pedal cycles.
6. Allow certain medical professionals, such as pharmacists and paramedics, to qualify in three years.
7. Remove requirements for agency workers to have all the attributes of a permanent employee.
8. Simplify the calculation of holiday pay (eg 12.07 percent of pay) to make it easier for businesses to operate.
9. Reduce requirements for businesses to conduct fixed wire testing and portable application testing.'

Mr Rees Mogg also announced that the forthcoming 'Brexit Freedoms Bill' would introduce a five year expiry date ('sunset clauses') for 1,500 pieces of EU legislation so as to force his ministerial colleagues to think seriously about whether they needed to be retained, amended or withdrawn.  Although there is much to be said for some sunset clauses, this blanket approach looked like causing significant problems for the ministers and officials who will be carrying out the (1500 simultaneous?) consultations - and for their consultees.

He doubled down on this announcement a few weeks alter when he announced a 'dashboard' (a new website) listing 2,400 pieces of retained EU law and invited the public to pick those they would repeal.  The official Cabinet Office announcement was a little more restrained:-

In September 2021, Lord Frost announced the review into the substance of retained EU law (REUL) to determine which departments, policy areas and sectors of the economy contain the most REUL.

Today, the Rt Hon Jacob Rees-Mogg, the Minister for Brexit Opportunities and Government Efficiency, publishes the outcome of this review, which is an authoritative catalogue of REUL. The Minister invites the public to view this catalogue so that the public is aware of where EU-derived legislation sits on the statute book and is able to scrutinise it.

Now that we have taken back control of our statute book, we will work to update it by amending, repealing or replacing REUL that is no longer fit for the UK. This will allow us to create a new pro-growth, high standards regulatory framework that gives businesses the confidence to innovate, invest and create jobs, transforming the UK into the best regulated economy in the world.

In terms of next steps, we will bring forward the Brexit Freedoms Bill, as announced in the Queen’s Speech, to make it easier to amend, repeal or replace REUL to deliver the UK’s regulatory, economic and environmental priorities.

Alongside the Bill, government will continue to engage with stakeholders to identify where we can maximise the benefits of Brexit and test opportunities for reform, from artificial intelligence and data protection, to the future of transport and health and safety. Any future reforms will prioritise making a tangible difference to improving people’s lives in the UK.

... [But the public should] use the normal correspondence channels to highlight any specific regulations they would like to see amended, repealed or replaced.

This committee carried on doing very good work scrutinising key regulatory proposals.  I particularly admired its demolition of Ministers' well intentioned but flawed decision to require all NHS staff to be vaccinated against Covid.  The Department of Health pressed on with the plan but eventually backed down, partly because too many staff remained unvaccinated (so their dismissal would have caused great disruption) and partly because the strength of the pandemic seemed to be waning. 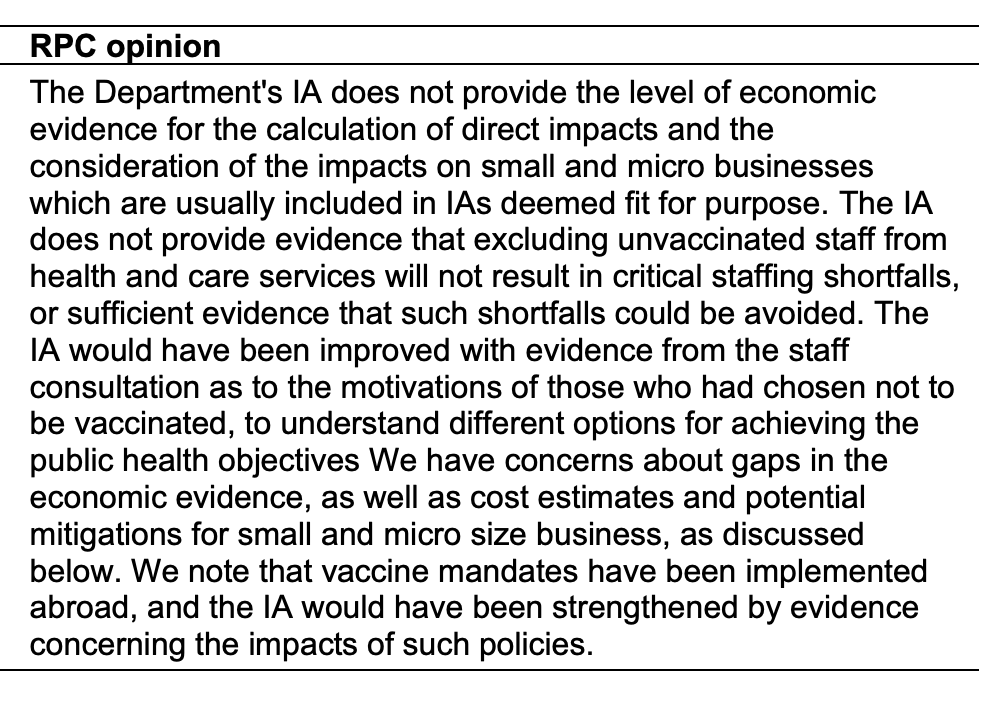